I could see it fitting into people’s bags as a portable projector that ticks a lot of boxes. I also could see most people balking at its cost: $579. Anker’s predecessor to the Nebula Capsule II was our pick as the best mini projector last summer. This new one is so much better that it’s a shame that it costs so much. It’s a great little gadget.

Unless you want to watch Netflix with it. 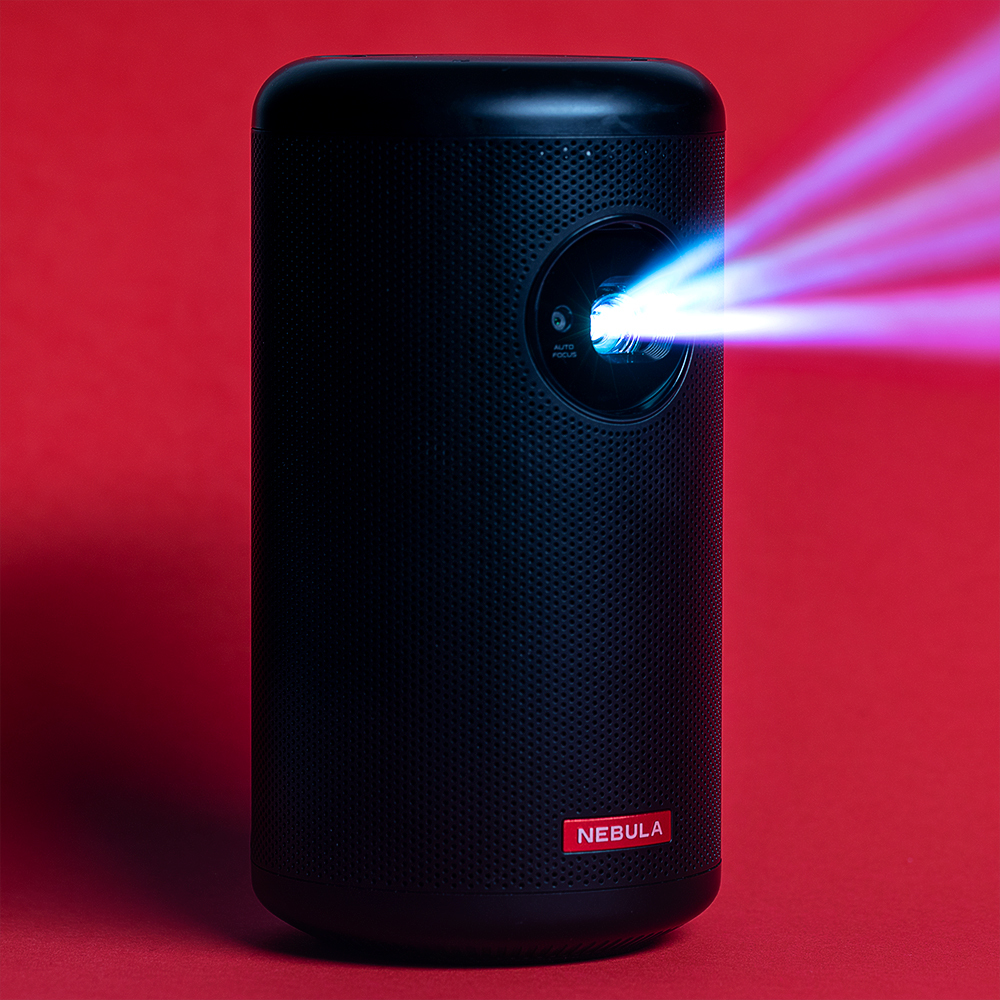 I love mini projectors. (You can also refer to them as micro or pico projectors, so I’m playing fast and loose with the terminology for this category.) The basic idea is that you have something radically smaller than a traditional bulb-based projector that you might mount to your ceiling. You could take a mini projector camping or use it in your backyard.

The Capsule II is portable enough to put anywhere, but it’s quite a bit bigger than the old one was. (Imagine one of those giant Foster’s beer cans, then make it just a little taller.) You can hold it in one hand, and you can throw it in most bags, but you’ll feel the one and a half pounds it weighs.

Even if you don’t know exactly what you’d want it for, it’s fun to imagine where you might create a gigantic screen on a whim — even if it’s just projecting a horse on your friend. But use any mini projector for even a little bit, and you’ll find they are still stuck in a particular phase of technological development: the fiddle zone.

Simpler than other mini projectors, but it has its faults, too

With a regular projector, you do all of that fiddling ahead of time. You create a permanent setup somewhere in your home over a weekend (or three) so that using your projector is as simple as turning on a traditional TV. With a portable mini projector, you face those challenges pretty much every time you want to use it.

The whole premise of the Capsule II is that it reduces the number of things you have to fiddle with. It is almost entirely successful in that — with a few unforced errors that are annoying but don’t ruin the experience.

On a practical level, the Capsule II solves two problems that few other portable projectors manage. First, it has a decently loud, decently good 8W speaker built in, which means you have one less thing to worry about when you set up to watch a movie. You can even use it in a Bluetooth Speaker mode, which has the added benefit of lasting way longer than the standard three-ish hours it can run in projector mode.

The second problem the Capsule II solves is just getting content into the projector so that it can project it. It has an HDMI-in port, but most of the time, you don’t need it because it runs a clean, native version of Android TV. That means you can use standard smart TV apps downloaded directly from the Google Play Store. As long as you can get a Wi-Fi connection, you can stream video from any app that’s installed on the device.

It will support Chromecast from several apps if you have the video saved locally on your phone. The device itself has very little local storage, and Android TV apps aren’t designed for downloaded content anyway. You can also play video via other means, including sideloaded apps that aren’t available in the Google App Store for Android TV or directly from video files saved on a USB thumb drive. (If you know what I mean, and I think you do.)

There’s an included remote control, so you can use this projector like you would any smart TV. In fact, it comes with the Google Assistant built in, so you can speak into the remote for searches. If you take nothing else away from this review, remember this: it’s a portable projector that’s nearly as easy to use as your smart TV, and that’s wonderful.

Sideloading Netflix and Amazon is not easy, nor is it fun

All of this simplicity made the Capsule II’s most serious limitation all the more frustrating: the only way to play Netflix on it is a ridiculously hacky workaround. Netflix, you might recall, is very picky about what devices it will certify for its video, and the Capsule II hasn’t made the cut yet. Netflix’s certification block also applies to casting video, unfortunately. So to watch Netflix, you either have to be clever enough to sideload it yourself or you have to do it Anker’s way.

Anker’s way is to install the smartphone app controller app, then send you through a series of convoluted steps to sideload Netflix on the device directly. (If you were hoping to just use Cast for Netflix, sorry, that doesn’t work either.) Then from now on, you can only run Netflix by hitting the button in the smartphone app. It all works, technically, but it’s an awful experience. It’s pretty rough to ask users to install a literal file browser app, and it’s just as rough to have to use a button on the phone to launch Netflix.

Speaking of rough: Amazon Prime Video is not compatible with this device, either. Aside from those limitations, I was able to watch all sorts of movies, HBO shows, and YouTube videos on it. Hulu, Spotify, Pandora. Sling, Showtime, CBS All Access, and a bunch of other standard smart TV apps are also available.

Beyond finding the content you want to watch, there is still the challenge of getting a clean, rectangular, focused image. When you set down the Capsule II, it is able to use lasers to autofocus. So far, so good. Unfortunately, the likelihood that you’d get the picture exactly where you want it on the first try is going to be low, so you’ll move the capsule a little to fix it. Once you do, it’ll go out of focus.

Anker set up the software to trigger autofocus when the device is moved, but it doesn’t work very well. The fix is to hold down the HDMI button on the remote to activate the autofocus, which is fine. But if you don’t have the remote handy, the only way to fix the autofocus — and this is what Anker suggested — is to pick the thing up and shake it.

The last fiddly thing with getting a good picture is the “keystone” adjustment, the thing that makes your picture look like a proper rectangle instead of a trapezoid. The Capsule II can only do vertical keystone adjustment, not horizontal. That means that you will need to position your projector centered directly in front of the surface you want to project on.

Getting both vertical and horizontal keystone adjustments in something this small would be difficult, and Anker also tells me that “comply with the Android TV certification regulations, we had to use only a vertical keystone.” It’s not a big deal, but you should be aware of it. There is a standard tripod mount on the bottom of the projector, so I just use it with a standard Joby GorillaPod tripod to make it easier to place in the right spot.

This all sounds dire, but in practice, it’s not — at least not if you have the remote and something good to set the Capsule II down on. You center it on a wall, point it up, hit the button to autofocus, and you’re done. Then it’s time to start playing a movie, and so long as you’ve got some kind of Wi-Fi, that’s as easy as doing it on your TV (minus Netflix and Amazon Prime video). Pro tip: make sure that Google Play movies is hooked up to your Movies Anywhere account so you can access movies that were purchased on Amazon or iTunes.

Once a video is going, the experience is nice. The picture can get really big and doesn’t seem to drift out of focus over time. Battery life really can reach just short of three hours in my experience, though you might want to have a charger or backup battery (it charges via USB-C) handy just in case. There is a fan that you can definitely hear inside, but it’s not loud enough to distract from the actual sound of the video you’re watching.

As for picture quality, don’t expect this to be as good as your TV. You’ll need a dark area, and the larger you make the screen, the darker your room should be. Anker rates it at 200 ANSI lumens, which is to say it’s brighter than many other tiny projectors, but nowhere near as bright as a dedicated projector you plug in. I projected it on lots of different surfaces and as long as the surface was flat, it produced a clean and sharp 720p image.

A portable projector is definitely an “aspirational” gadget. You can easily imagine all sorts of situations where you would be the hero with a TV in your bag. I personally like having it because I don’t want a TV in my bedroom but sometimes, you know, you just need to be in bed all day and binge something. Or maybe you have a backyard and want to have a little s’mores-and-movie time.

Ask yourself: how often will you really watch a movie after hanging out by the campfire?

All that sounds great! But it also sounds like the sort of thing you’d daydream about but probably won’t do as much as you’d imagine. If this were a cheaper gadget, I’d say go on and buy your dream — you only live once — but $579 is way too much to spend on a daydream.

If the price doesn’t put you off and you’re also the sort of person who isn’t worried about those video content workarounds (I don’t judge), I think it’s a pretty great little TV in a can. I’m glad I have one. But as I’ve said before: if you have to pile on a bunch of caveats and if-thens before you recommend a product, that’s not exactly a ringing endorsement.